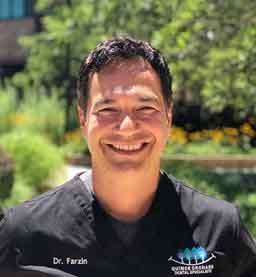 Sina Peter Farzin has been involved in dentistry since 1994, as a clinician, researcher, and educator, and has developed a variety of skills and gained invaluable experience in that time. He practices in Washington DC, Maryland and New York where he received his dental degree and a specialty in periodontics at New York University. The patients that he treats have special therapeutic needs, either because of regimen complexity, difficulty in reaching the goal clinical outcome, or lack of adherence to the treatment due to the fear of dentistry.

His interpersonal skills and commitment to excellence have awarded him the highest level of care which has been recognized by friends, patients and colleagues alike. In addition to the care of individual patients, his experience has been requested to aid the production of guidelines that influence patients in a global setting. He has participated in a number of national and international initiatives pertaining to periodontal plastic surgery. His most recent endeavor, in combination with Osteohealth Co., he conducted a technique sensitive bone grafting surgery on Video with the use of Bio-Oss and Bio-Gide (Bone regenerating materials). The Video has been so successful that it is currently being used by the entire sales force for the purpose of educating fellow clinicians. He is also a member of the Academy of Osteointegration, the American Academy of Periodontology and the American Society of Dental Anesthesiology.