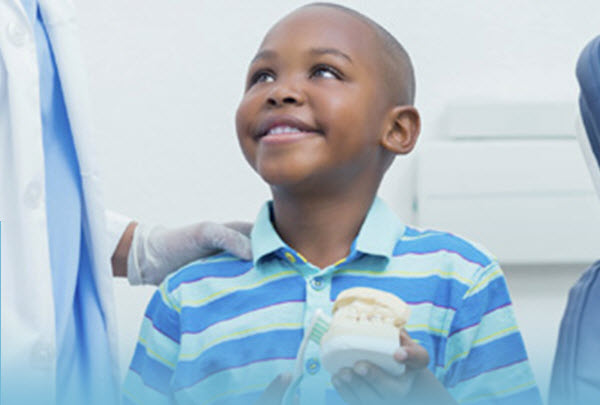 Regular dental visits are important year-round, but a back-to-school checkup is key in fighting the most common chronic disease found in school-age children: cavities. In fact, dental disease causes children to miss more than 51 million school hours each year.

Prevention and early detection can help avoid pain, trouble eating, difficulty speaking and school absences. “When people are beginning to do their pediatrician checks to make sure their kids are school-ready, make sure teeth are part of it,” says pediatric dentist and American Dental Association spokesperson Dr. Mary Hayes.

Between cookouts, camping trips and everything else on your family’s summer bucket list, it’s easy for school to sneak up on you. Unfortunately, many parents may not think about making that appointment until August, which Dr. Hayes says is one of her busiest times. “The rush is pretty intense,” she says.

Give yourself enough time by making it a habit to call when your child gets her spring report card each year. “Planning ahead is good,” Dr. Hayes says. “If families want to avoid the rush to go back to school in August, then plan on getting appointments for the beginning of the summer.”

The best kind of checkup is a cavity-free checkup. Moms and dads can help make this happen by encouraging kids to brush twice a day for two minutes and floss once a day. Here’s Dr. Hayes’ age-by-age advice:

At this age, your child might want to do all the brushing herself but doesn’t have the fine motor skills needed to do a thorough job. Let them start and jump in when needed. “During that age, the mouth is changing so much that children who are 5 or 6 are often brushing their teeth in the way they were when they were 2 or 3,” Dr. Hayes says. “They’re not accommodating the new molars, and they’re not accommodating the fact that the mouth is growing.”

By now, your child knows what to do, she just might not want to. Keep encouraging healthy brushing and flossing habits. “Be aware of the fact that sometimes you have to take over a little bit more,” she says. “By the time they’re teenagers, they’re starting to understand self-care, accountability for their actions and such.”

Dr. Hayes says this is a critical time for dental health. “When you look at research for when caries appear in kids, it tends to be in young kids. But another bump-up time is teenage years and early adulthood,” she says. “Part of this has to do with the fact that teenagers may have gone for many years and never had a cavity. They don’t necessarily take care of their teeth because they don’t see the consequence of not.”

Don’t let your teen’s habits become out of sight, out of mind. “The behaviors of the teenager are going to translate into the 20-year-old. We want to be able to support them and be respectful of them because they’re not kids anymore.”

Time of day can make or break your child’s appointment. “It’s important for a child of any age who’s used to a nap to not schedule during naptime,” she says. If your child is always cranky after waking up, factor that in too.

For older children, avoid cramming in a dentist appointment right after day camp or school. “Not all kids have the energy to do that,” she says. “I will have parents who want to do very elaborate operative work after school because that’s when the kids can come out. But if the child has already been exhausted or had a bad day or had tests, they just don’t have the stamina to make it through the appointment successfully.”

Make One Child a Model

If you’ve scheduled back-to-back appointments for your children, there’s a simple way to decide who goes first: Choose the child who’s had the most positive experiences at the dentist. “Every child is going to be a little bit different in their temperament about how they approach a visit,” she says. “You generally want the ones first who are more successful because the others get to see how it goes.”

A Hungry Child Is Not a Happy Patient

Feed your child a light meal before the appointment. “Hungry people are grouchy people. You want them to be comfortable,” she says. “It’s also generally a good idea not to feed them in the waiting room before you see the dentist because there’s all that food in [their mouth].”

Eating light is also better for a child with a healthy gag reflex. “Some children gag a lot just because they gag with everything,” she says. “As they age and they get more control over swallowing, kids tend to gag less.”

Leave Your Anxiety at the Door

If your heart races at the very thought of the dentist, your child can probably tell. “Kids pick up on parents’ anxiety,” Dr. Hayes says. “It’s important with kids, especially at 4, 5 and 6, because I believe the phobic adults are the ones who had bad experiences when they were that age.”

The younger your kids are, the more you need to be aware of how you’re communicating with them. For example, if your child asks about getting a cavity filled, don’t say, “It will only hurt for a little bit.” Instead, encourage your child to ask the dentist. “With any child, you want them to be able to feel successful at accomplishing a good visit and link that positive feeling with the idea that their teeth are strong and healthy so they have that message going forward for the rest of their lives.”

If your child gets upset during her visit, the worst thing you can do is swoop them out of the chair and leave. “The next visit is going to be harder,” Dr. Hayes says. “You still have to help them get through part of the visit.”

First, assess why your child is acting out. Are they truly afraid, or are they trying to test the situation? “One of the reasons I think a 4, 5 or 6-year-old gets upset is because they think they’re going to be asked to do something they can’t be successful at,” she says. “They’re in an environment they feel they can’t control and that makes them upset, so we try to break it down into small steps.”

Then, work as a team with your dentist to keep the visit going. Let the dentist lead the conversation. Jump in where you think it helps most, while still allowing the dentist and your child to build a good relationship. “Give the dentist every opportunity to turn the visit around,” she says.

Take a Card (or Three) on Your Way Out

Accidents can happen whether your child is in sports camp, gym class or just walking down the street. In case of emergency, make sure your child’s teachers and coaches have all the medical contact information they need – including your dentist’s number. Grab business cards for your wallet, your child’s backpack and your school’s files. “Parents should be very aware of accidents and make sure that wherever they go they bring the number of their dentist so that if a child has an accident, they can certainly call the office,” Dr. Hayes says.